We should all be Journaling during Covid-19

Two weeks ago — after four solid weeks of staying home — a friend texted asking when I might have a few minutes to talk. We were both home literally all day, but it still took more than a bit of maneuvering to make the call happen. When it did, I found myself sitting on the floor of my master closet, white noise machine on, door closed. My friend took the phone call from a remote location: her car, extra large Diet Coke in hand. Subterfuge felt necessary. We both have elementary, junior high, high school and college kids, and husbands. All with excellent hearing. All at home. All day. All trying to study, and work and live under one roof. Day after day after day. And there we two moms were, stuck in the middle, trying to manage. And not always managing well, or managing at all, or mismanaging.

So it was well past high time for a chat in which we couldn’t be overheard laughing and crying and cry-laughing and laugh-crying (somewhat hysterically, I might add). That memorable phone conversation is one of my many COVID-19 pandemic stories. And until I started preparing this article, I hadn’t thought to write it down. Failing to document a “quarantine” story probably won‘t matter much. But failing to document any of our quarantine stories could matter a great deal more than we realize. Why? We’re currently living — and dying — during a once-in-a-hundred-years pandemic, and the details of our lives have suddenly become historically significant. Another strange new reality of 2020.

and the details of our lives have suddenly become historically significant.

Another strange new reality of 2020.

Why you should document your COVID-19 experience

In Time magazine’s “Why We Should All Be Keeping Coronavirus Journals,” historian Katherine Sharp Landdeck explains, “It is sometimes hard to imagine, but we have always been a part of the past. Now we are part of our own historical moment in time, a period that historians will debate for decades, even centuries to come. Our chance to control some of that narrative is in our hands. If we don’t want to be forgotten we must write down our own experiences and thoughts.”

In her New York Times article, Audra D.S. Burch further illustrates how important the details of all our lives — yours and mine and our kids’ and our neighbors’ — will be to future historians, pointing out that “Universities, archives and historical societies, ranging from the Smithsonian’s National Museum of American History to a tiny college radio station in Pennsylvania, are rushing to collect and curate the personal accounts of how people are experiencing this sprawling public health crisis as told in letters and journals, audio and video oral histories, and on social media.”

The influenza epidemic of 1918, which killed an estimated 50 million people, has long been studied by historians. My great aunt, Blanche Killingsworth, wrote the following in her diary:

“Early on, in the 1918 flu epidemic, dad, mother, and Argil caught the flu. I guess Homer and I were too ornery to take the flu. We were at that age (14 and 10). The doc came out once to give them some medicine. Our neighbor would call, ‘I’ll bring a basket of food over and set it on the porch. Don’t you come out ’til after I leave,’ she would say. ‘You empty the basket and set it back on the porch.’ Everyone around was scared to death of the flu. Nobody knew what to do. It was a new disease. Clyde Cauble was the one neighbor I remembered that we lost. People wouldn’t come in to help you. Dad was a kind of nurse. He’d go out and care for the sick. They’d always send for him to come. We took food to other neighbors when they got sick.”

‘I’ll bring a basket of food over and set it on the porch. Don’t you come out ’til after I leave,’ she would say

when the neighbor called

If I were to swap out “flu” for “COVID-19” in Blanche’s narrative, much of it would fit right in with what I read on social media every day — and you can bet Blanche and I would be talking on the phone. So details from our lives in 2020 are important, and they will most definitely benefit both our families and historians, but where to begin?

How to document your COVID-19 experience

Many of us do an excellent job documenting events through social media. According to Landdeck, that’s actually a great place to start. “Some of our tweets will be saved by the Library of Congress for posterity,” she wrote. “But these public sources will be just snippets of our present. Historians will need more to ensure that the stories that are so often lost to the past are told. Oral histories and personal journals will be vital tools to take their understanding beyond the headlines.”

Landeck goes on to explain, “In 1937 a group of scholars in Britain began the Mass Observation Project, asking regular diarists to observe their own lives and the world around them. The project continued and grew throughout the war years and to say the observations have become invaluable is not an overstatement.”

One such “regular diarist” I very much wish I had known was my husband’s mom, who died before I met her son. A beautiful wordsmith, she journaled off and on throughout her life, once documenting the story of a canoeing trip on a paper bag. But my favorite entry appeared around the time my husband, the fourth of four boys, was a baby.

“Four too many boys,” she noted. That concise, four-word observation has become invaluable to me — particularly on the days when I’ve been certain I have three too many boys and two too many girls.

Just as my mother-in-law could never have known how much her journal entry would come to mean to me, we can never know what our entries will come to mean to future generations.

If we’re not in the habit of journaling, the thought of journaling (beyond social media posts) can feel intimidating. Herbert “Tico” Braun, a professor in the University of Virginia’s Corcoran Department of History, told UVA Today, “There is much that (we) all have already experienced that is shocking, unexpected, unpredictable, unknowable, new.” He then suggests we ask ourselves, “What is it like to live today knowing that we do not know what tomorrow and the day after will bring? … Think of your children, your grandchildren, your friends down the road, who will ask you what was it like during that pandemic.”

My takeaway from these historians, and my mother-in-law, is that my normal, rather boring life matters and should absolutely be written about.

“Most of us don’t lead glamorous lives,” acknowledges Heather Sundahl in her article “The Stories We Tell and What they Tell Us.”

“Most of us feel like our stories are too mundane and simple to be of real value,” writes Sundahl, a writer and media specialist at the Utah Women and Leadership Project at Utah Valley University. “Our stories do matter. It is how we relate and shape the events of our lives that determine our happiness. It is in the telling that we find the meaning.”

Our stories do matter. It is how we relate and shape the events of our lives that determine our happiness. It is in the telling that we find the meaning. – Sundahl

Write it down. When you do,

Finding meaning through the telling of our stories can literally change our lives, says Braun. “Write it down. When you do, much of your life and who you are will be different than if you don’t,” he said.

The COVID-19 pandemic and resulting social restrictions have thrown us into crazy, interesting, quirky situations from which social media meme dreams are made of.

But what of the tough stuff? The stuff we lock ourselves in our cars and closets to talk about and cry over? The impossible-to-get-through-let-alone-write-about stuff that never makes it to social media?

Sundahl advises us not to let “idealized images make our story feel wrong. The hard or sad times are not just part of your story but the very elements that give you the potential to change and grow. Holocaust survivor Viktor Frankl wrote, ‘When we are no longer able to change a situation, we are challenged to change ourselves. … We always have a choice. We cannot control the plot of our lives, but the theme is ours to shape.’

How will we shape our COVID-19 theme for future generations of family and historians? Maybe we could start, today, by writing one sentence. Taking a cue from my mother-in-law, I think I’ll begin with, “Thirty-eight too many days in quarantine.” “The way you explain the daily events affects the way you see your whole life,” Sundahl explains, “Sentences build paragraphs, paragraphs create chapters, and chapters form a book.” One day, I’m hoping to look back over the years and see that what started with one sentence has become a book. It won’t be witty or deep or even very interesting. But it will be history. And it will matter.

Published in KSL.com – HERE’s the link

My COVID-19 experience: Welcome to the pandemic 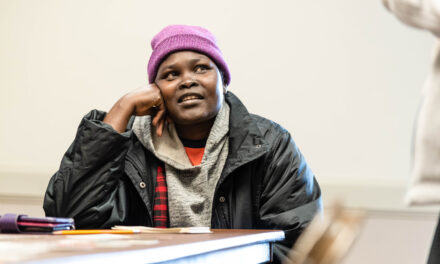 How teaching English classes has taught me to live with dignity, tenacity and courage.