Published on KSL.com – HERE’s the link
Published in CrossTimbers Gazette – HERE‘s the link

For my remarkable parents, who were much smarter and possibly a tiny bit wealthier than their kids ever gave them credit for.
DALLAS — My parents raised a large family on next to nothing. The list of what we lacked while I was growing up is long, so here’s a shortened version:
A dishwasher. When I was 3 years old, our family of five moved into a small house that had been built before dishwashers became standard household amenities. When I left for college 15 years later, a dishwasher was still at the top of our “most wanted” list.
Square footage. My parents aimed high, and our numbers grew at a staggering rate. After Mom had her seventh child, she contended that nine people living in 1,250 square feet officially exceeded capacity. And that Dad would be wise to do something about it (the “or else” was more or less implied). Dad took the hint.
Because funds were scarce, Dad hired a college student to assist him and my brother in converting our garage and back porch into living space. The resulting 1,950 square feet felt palatial. So large, in fact, that my parents figured there was room enough to add one more. My baby sister rounded our numbers up to a nice, even 10.
A garage. See above.
Regular milk. Normal people buy milk in gallon jugs; Mom bought ours in 50-pound bags. We used spoons to scoop the froth and chunks off the top of the reconstituted powdered milk, but masking its dreadful aftertaste was more problematic. Our only hope was holding our breath while swallowing, and then being extra careful not to inhale until after taking a bite of food. Breathing too soon spelled taste bud disaster. 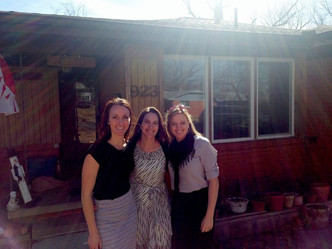 Camping in the Rain

Momsensical: A gazillion dollars per kid