It's all about speed

Note: You might want to click HERE to read about last year’s Pinewood Derby before reading this post. Just so you’ll know where I’m coming from. Or, I’ll sum it up for you in three words: Just shoot me.

My husband Jeff decided to help Seth craft a school bus that also had a chance at being a super fast medal contender. It was a lofty goal. So he studied online models and tips and worked hard at designing and cutting and sanding and such. Seth hung around his dad most of the time, fetched the tools, brought the drinks and snacks, even got to sand the bus and do some painting. I think.

Jeff came home from the weigh-in worried that the underside of the bus was too low and might not clear the track. Even though the Scoutmaster had assured him otherwise. I felt it necessary to remind Jeff that Seth was going for different and cool, not fast. Jeff nodded as if in agreement, but went on to describe about how much time he (and presumably Seth) had invested in sanding and polishing the axles.

I was secretly glad to learn that Jeff would be out of town for the Derby, preferring he not be in the state in case things went south. Which they did.

The Bus placed four out of four in race after race after race. I watched Seth’s face become increasingly upset and embarrassed with each race and wanted to remind him that he had been going for different and cool, not fast. But it was painfully clear to me that deep deep down, Seth wanted the Bus to be fast. 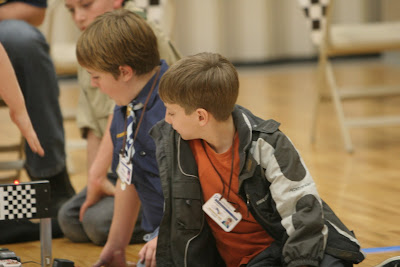 Despite all the rhetoric, it was all about speed. His dad had understood.

About the time I was fighting back tears and willing the Bus to place at least third at least once and hoping Seth could hold it together until we got in the car, Jeff called for an update. I took issue with his timing.

My hopes soared when the Bus raced against the Cupcake Car. The cute younger sister of a fellow Cub Scout had built a darling car and topped it with three frosted sprinkled cupcakes. Literally. When the Cupcake Car came in third and the Bus fourth, I felt slightly torn. I wanted to be happy for the delighted girl who had just placed third instead of fourth for the first and only time that evening. But my emotional loyalty remained with my ten-year-old son, whose Bus had just lost to three frosted cupcakes.

I thought it best to take Seth home before the awards ceremony, but he was busy eating cupcakes – not the ones off of the girl’s car although I wouldn’t have blamed him – and wanted to finish. We knew he hadn’t won, and by that point I figured an extra cupcake or two could mean fewer tears once we got in the car. Maybe.

Four awards were given that night: 1st, 2nd, 3rd place Winners for Speed, and Best in Show.

You could have knocked me over with a feather when Seth’s Bus received the Best in Show award. Regrettably, it had been the slowest.  But by golly it looked different, cool, and had most definitely stood out from the crowd – at least one of the things he had been going for.  It took a couple of shocked seconds for Seth to find his smile. But find it he did. 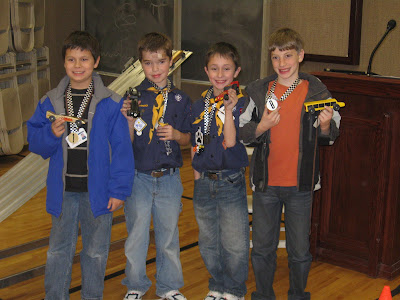 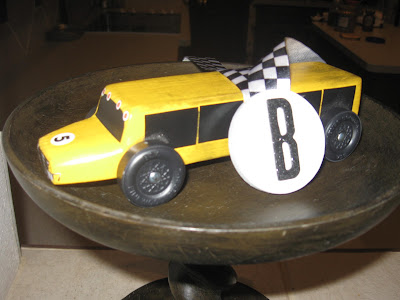 When I called Jeff with the recap, he was genuinely happy for Seth’s Best in Show award. But then he said, “The bottom of the bus had to have been scraping the track. I have never polished axles as much as I polished those. When I spun them, those wheels spun forever.”

Despite all the rhetoric, it was all about speed.

The trouble with elves